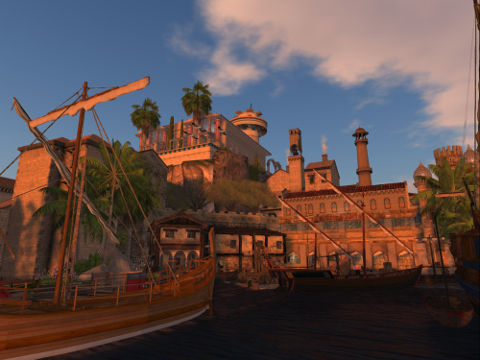 The sim is a privately owned, Gorean role play sim.

The Gor Chronicles comprise a set of 35 books by author John Norman that are written in the tradition of 20th century pulp fiction, the genre specifically known as “planetary romance”. They detail a world on the opposite side of the sun from Earth, a Counter-Earth, ruled by technologically god-like golden insectile creatures known as Priest-Kings. They are at war with another space-faring, bestial race known as the Kurii and that battle is often played out on the surface of Gor through hidden plots and machinations to control the population of humans. The Goreans have evolved over the centuries in such a way that men are biologically dominant and that is expressed through the social and legal standards of the cultures across the planet. The level of technology is kept to a period akin to the Ancient Greek and Roman periods of Earth history by Priest-Kings, though there are some exceptions such as the “stabilization serums” that allow Goreans to live for centuries and retain their youthful appearance and vigour throughout their lives.

1. Please read our rules fully. Ignorance of them will not be considered an excuse for inappropriate behavior in our home. By entering the sim you agree to abide by our rules, and the decisions of the admin team. We reserve the right to share IM conversations regarding RP moderation issues where appropriate.

2. Wherever possible please address general issues and inquiries regarding a particular group to the appropriate leader(s) for that group in the first instance. They are best equipped to handle your issue in an efficient and timely manner.

3. Role play issues should be addressed to role play moderators in the first instance, who have the full confidence of the admin team to resolve them appropriately.

4, The latest version of the zCS meter is required.

5 Roleplay issues usually follow a system of 3 warnings, followed by bans of increasing duration for subsequent issues, until a permanent ban is placed.
– No meter, persistent use of OOC/AFK settings to avoid roleplay.
– Teleporting out of an engagement.
– Teleporting out of a capture.
– Illegal weapons.
– Invalid kills.
– Knowingly breaking acceptable personal limits.
– Dual alting in battles.
– Cross playing alts.

6, OOC issues usually follow a system of temporary bans of increasing duration for subsequent issues, until a permanent ban is placed.
– Use of OOC in main chat.
– Trading in Lindens.
– Begging for Lindens.
– OOC Insults, harassment, abuse.
– Emoting to disguise speech.
– Improper dress.

7. There is no OOC observing while on this sim at anytime. You may observe, but you must be with a RP meter and dressed in gorean attire. We welcome you to explore the city but please be respectful of our rules and other roleplayers. Someone may interact with you!

1. Free Women
Free Women are regarded highly within Gorean culture. In large cities and southern cities, they are found covered with a veil, sometimes many layers of veils to conceal their faces and body, preserving the virtuous nature of the woman. The City of Kasra requires women of high castes to be concealed with a veil and their hair must be up. (Ponytails are not accepted) If you are playing a character of low caste, veils are not required, however men within the city are welcome to take IC action against your character for exposing her face, as many male goreans see this as a woman flaunting themselves.

2. Slaves
Slaves may enter the city unaccompanied. However they must have a purpose for their visit (i.e directions from a free person to pick up goods or trade for the free person). Any slaves found wandering the city, unaccompanied with no purpose for their visit risk being captured and kept as a slave for the city kennels. (If this is your intention and wish to join us, then please let us know! We are happy to get you started)

Visit us today to get your own home started without joining the City!

1. You are expected to handle both yourself and any problems in an adult and mature manner. You will be removed if you cannot do this. Please make all reasonable attempts to resolve conflict in an IC or OOC manner with the persons involved. If no reasonable solution can be reached, then and only then, come speak with a leader of the sim. Please remember to always be respectful. They are real people at the keyboard with real feelings and emotions. We do not allow insulting, aggressive or harassing behavior in OOC/IM.

2. We do allow for the use of alts (another second life avatar) to be played within the city. You may not use alts to crossover storylines with existing avatars. There is no use of alts for revenge. Keep your avatars in separate castes to avoid crossover. Alts may only be used to create beneficial roleplay for the City. Alts may also not be used to hold secondary positions of power. (Having one high caste and one low caste is ok)

3. Most Goreans, if not all, would either attack or flee when confronted by a Kur. Kurii do not walk the streets of Gorean cities. They may sometimes be hidden within buildings in some cities but they do not walk around freely, even in those buildings. Few Goreans know of their war with the Priest-Kings or much about them at all. Most Goreans would view them as animals or monsters that should be destroyed. Kur, be warned.