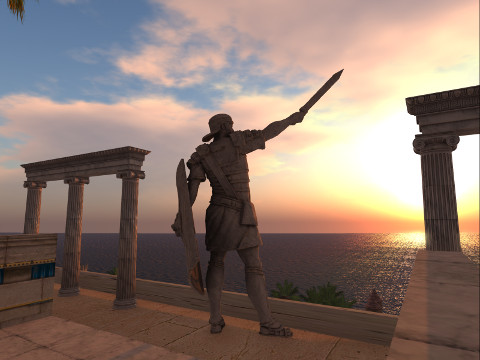 1. “Normal” death is 36 hours, must be emoted in a minimum of 3 descriptive emotes, and requires 30 minutes roleplay in advance of this, as well as a good IC stated reason. A notecard must be provided to an Administrator/Ubar/Regent for the kill to be valid. For Assassins the 30 minutes rp is included in the hunt. The term valid rp killing refers to a killing as part of a major rp scenario, which must be presented to a moderator for consideration by the council if necessary.

Avatars whose death has been a part of big sim storyline f.e trial and execution preformed by a city IC administration can not play 36 hours death. Unfortunately, if your death has been part of such RP for the sake of IC continuity we can not allow same character to return.

2. IC combat.
In the case of IC drawing weapons/duels/attack/capturing someone one post with clear intent must be made. F.e. drawing weapons while describing intent to strike someone.

3. Females are permitted in the city and must be suitably attired or risk force collaring.

4. Uncollared slaves may be force collared by any Free. (See the laws about slaves.)

6. Escapes are absolutely IC matter. It must be role-played out reasonably, NC must be provided to RP moderator who will validate escape.

Note: We urge you to discuss matter of escape OOCly with your captor. F.E – If your personal limits state you will do no more than 3 days of capture, discussing it OOCly can help with arranging valid IC scenario.

7. Anyone captured and taken from any of the sims may attempt to shout to leave clues as to their capture. If the captor in a sailing post uses his destination spoken to the boat captain, this may be used for IC knowledge as to whereabouts of a captive. This is the only NPC that can be used to find information regarding a captive.

8. Captives will be returned using roleplay coinage and goods, including hostages. The ZCS meter and coin system may be NOT be used for this process. We accept only prim coins which can be rezzed and recognized.

1. Raids are for the additional roleplay. They generate and should be enjoyable. The mods on this sim will not be inclined to call something invalid unless there is overt cheating. Remember we are all here to have fun.

2. All the lands of Kasra and Fayeen are subject to the laws and rules of the main city and fall under the jurisdiction of the Magistrates (IC) and Moderators (OOC). There is no safe zone anywhere on the ground level of the sim except the north west corner of Fayeen. All housing is considered as IC buildings and can be used for roleplay purposes.

A) NO FEMLAWS AND NO RP/RAIDS WITH GE SIMS
B) NO BIRDS – YOU MUST ACTUALLY SEND SOMEONE TO ANOTHER SIM FOR AID; NO IMs
C) NO FLYING
D) NO JUMPING
E) NO FIRE ARROWS. NO ROPE ARROWS
F) YOU MUST EMOTE TO DRAW YOUR WEAPON

For a raid count, check the warrior counter in the skybox AND contact raid moderators of the City of Kasra.

6. The use of tarns is permitted. They are limited to 2 per side. They must be “rezzed” upon arrival at the raid entry. There is no use of Tarns to “ferry” in other warriors to parts of the city. No re-rezzing of tarns once they are killed. 20/20 tarns.

7. Rescue attempts may not commence until after 2 hours from the time of capture.

8. The sending of birds (IMs/Notices) to aid rescue is forbidden.

9. You may not reset your meter unless authorized by a Moderator or Admin.

10. Use of grapples or ladders must be clearly emoted. Only grapples with a grapple animation are allowed.

11. Doors that are pickable require a minimum of 3 posts to pick the lock. This means in the duration of 2 minutes while the door is picking, you must have 3 complete posts (10 words minimum per line) by the time the door opens. If you cannot get a menu for a door, that means the door is not intended to be gone through. Use of Prim sitters through a door is NOT allowed at anytime. Stopping a lockpick from either side requires a minimum of 2 posts to stop the pick. This means before the “STOP” option is selected, two lines have been posted (minimum of 10 words per line)

12. The use of gestures for everything but drawing weapons is forbidden. The banned list includes, but is not limited to, binding, searching, grappling and escaping.

13. No jumping/somersault AO’s during battles or to escape capture. No sliding. No AO’s or animations which displace your avatar. No animal walk/run AO’s and no speed enhancers.

14. No fighting or running while dragging a leashed captive

15. Use of multiple avatars in any single engagement is not allowed.

16. You may drag and leash one captive at a time only, unless feet are untied, then you may drag 2 at most.

17. Aiding someone who has been downed requires 2 posts. The defending city’s slaves can aid and unbind.

18. You may not role play or shout while in a bubble. You are considered unconscious and must act as such.

19. Valid captures must consist of a minimum of three posts, consisting of one disarming post (minimum), and three (3) binding posts (minimum). While disarming a person, you must individually name each weapon. Blanket disarms are not accepted and will leave the captive still armed if used. (Not allowed Ex. /me takes all their weapons, ensuring the sheaths are empty) If you choose not to disarm a clearly visible weapon, the use of it must be expected. Likewise if you choose not to disarm concealed weapons, the use of them must be expected. You may not fully disarm a captive of concealed weapons in a single post.

20. Self Unbinding requires 5 descriptive emotes over a period of 10 minutes from after any combat involving you personally has ceased. You may not self unbind if you are leashed by someone.

21. If you are not wearing a prim sheathed iteration of a weapon, then you cannot draw it and use it in combat. This can include pouches or bags for small enough weapons. Similarly weapons that don’t have sheaths must be visible. Re-arming during combat must include a suitable search for a weapon or use of a re-arming rack from various points within the City.

22. Combined raids/rescues consisting of more than 3 groups are not permitted. Tags of all encompassing groups designed to, or with the effect of, circumventing this rule will not be recognized. Individuals with no tag, or a non group specific tag, count as one group. Panther girls are not allowed to raid as a group, this would not be feasible against such a large city.

23. Female outlaws or mercenaries are not welcome. Bringing such with you on your raid automatically invalidates your raid roleplay. No females are allowed to accompany men in a raid except properly outfitted and armed slaves. Free women did not ride into battle with their men, leave them at home or stay at home yourself.

24. Slaves are permitted to defend their home if they have been approved to do so by their owner or by the Master Slaver. They are not permitted to roam the sims bearing weapons or engage in hostilities. Those who take issue with slaves bearing weapons may resolve it in an appropriate Gorean manner in roleplay. Female Slaves are limited to weapons found around the area, f.e.: brooms, rocks, apples, books. They must be low damage (11-15%) weapons. Slaves are not allowed blow darts. Male Slaves are allowed 20% damage for range and 40% damage for a melee.

25. Stealing of ZCS coins are not allowed.

26. There are no safe zones on sim outside of the landing area in the sky. and the north west corner of Fayeen.